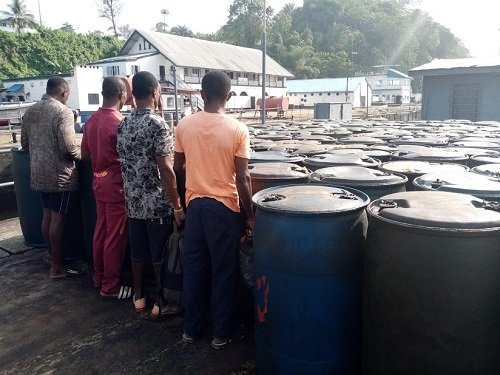 A wooden boat filled with 144 drums of petroleum product suspected to be illegally refined, has been intercepted by the Nigerian Navy.

The wooden boat was intercepted by officers of Nigerian Navy Ship, NNS Victory patrol team during a routine patrol around Agbana West by Tom Shot Island Breakwaters along the waterways of Cross River State.

The suspects, one Cameroonian by name Daniel Nekoli and three Nigerians, namely Emma Effiong, Victor Okon and Kingsley Etim were paraded before newsmen by Commander of the NNS Victory team, Rear Admiral Vincent Okeke represented by Captain Muhammad Umaru. The total market value of the seized items at N15, 504, 000.

Umaru also stated that they are aware that smugglers are desperate to bring in contraband into the country within the yuletide season for personal economic gains.
By Linda Ochagla at Friday, January 03, 2020