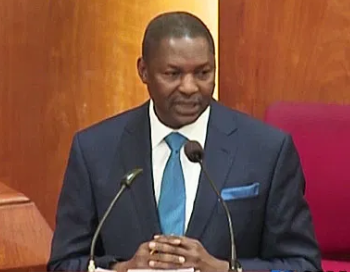 Abubakar Malami, attorney-general of the federation has said the federal government was right in detaining Omoyele Sowore and Sambo Dasuki despite court orders for their release.

Malami said this on Thursday, January 2nd when he appeared on NTA programme.

Sowore, convener of the Revolution Now movement, and Dasuki, former national security adviser (NSA), were held by the Department of State Services (DSS) long after several court orders were issued for their release.

Speaking during the programme, Malami, who later asked the DSS to release both men, said the government never erred in holding them despite the court orders. He said the government has the right to still detain Sowore and Dasuki until an appeal against the orders is determined by the supreme court.

“If a decision is made, or a judgement is passed, you have an option: one, absolute and unconditional compliance; two, challenge to the order by way of either an appeal against it; or asking that the order be reviewed or appealing and applying for stay of execution,” he said.


“So, in respect of those orders we are not comfortable with as a government, we go back to the court and have them challenged. Until that matter, that your right of challenge, is determined up to the supreme court level, the idea of you being charged with disobedience of court order does not arise.”

Asked if the government applied for variation of the court orders against Sowore and Dasuki, the minister said there were applications to set aside the orders.

“There were appeals for stay of execution all through. So, until those matters reach the supreme court and the supreme court takes the final decision, relating there, you are still operating within the ambit and context of rule of law” he added.
By Linda Ochagla at Thursday, January 02, 2020