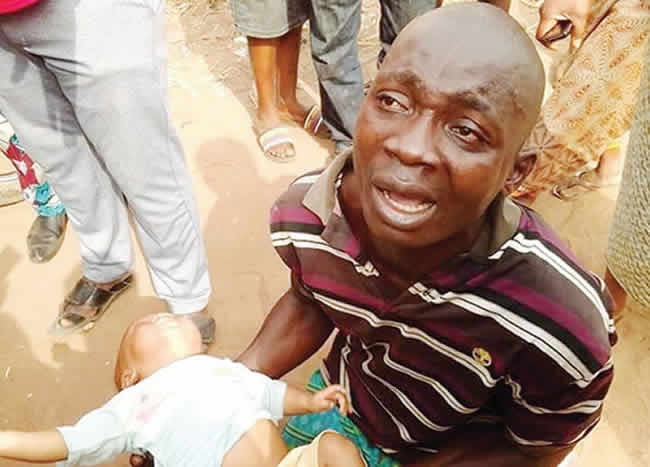 Nsem Godwin pictured above, has been arrested by men of the Ondo state police command for allegedly kidnapping a four month old baby in Okitipupa town, Okitipupa Local Government Area of the state.

Confirming the arrest to newmen, the state police command spokesperson, CSP Femi Joseph, said the suspect was arrested by the Highway Saver Policemen of the command, while he was attempting to escape with the victim.

Joseph said the suspect somehow found his way into the compound where the baby resides with his parents. The baby was playing in their compound with his older brother when the suspected kidnapper abducted him. Luck ran out on him when he was spotted by some residents of the community who questionned him on how he got the baby. He couldn't give any meaningful answer as he began to pretend that he was mentally unstable.

The elders in the community reportedly prevented the angry residents from lynching him to death. He was immediately handed over to the police.
By Linda Ochagla at Thursday, January 09, 2020