Rev Andimi: Nigerians Knock Adesina Over Comment Against CAN 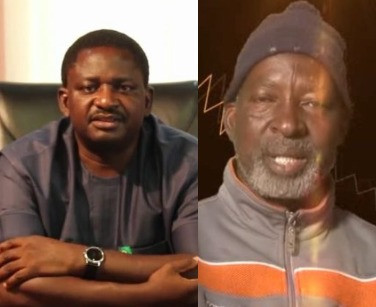 Nigerians have taken to social media to fault Femi Adesina, presidential spokesperson over his comment against the Christian Association of Nigeria(CAN) regarding the recent beheading of Reverend Lawan Andimi, the Chairman of CAN in Michika Local government area of Adamawa state by Boko Haram insurgents.


Adesina in a post on his Facebook page on Friday accused CAN of painting Buhari as an ”anti-christian” stating that “security is number one on the priorities of the Buhari administration”.
Adesina said, “I am mourning Rev Andimi, not just because he was a cleric, but because he was a human being. And my distress was increased by the statement issued on the tragic event by the central body of CAN. Too many things were mixed together, which the apex Christian body in the country should have been mindful of, lest it departs from the mind and essence of Jesus Christ, our perfect example.
“For years, since he emerged on the national scene as a military leader, and later as an aspirant for the highest political office in the country, and eventually as President, spirited attempts have been made to position Muhammadu Buhari as anti-Christian faith. It worked against the man for a long time, till majority of Nigerians saw through the smokescreen, and made up their minds against the demonization.
“That was why as much as some church leaders tried to dress Buhari in borrowed robes in 2015 and 2019, millions of Christians went ahead to vote for him. The inexorable truth is that in Nigeria, Muslims can’t wish Christians away, and vice-versa. We shall all stay here, and salvage it together.
“However, the statement by CAN on the death of Andimi gives hint that the leadership of the Christian body still harbors some of the old narratives that have been discredited, and from which majority of people have purged themselves, except the willfully irredeemable.
“Hear CAN, through its Director of Legal and Public Affairs, Evangelist Kwamkur Vondip, speaking for Rev Samson Ayokunle, President of the body: “Maintenance of security is the least responsibility of any government that knows its worth. We are once again calling on President Buhari to purge himself of the allegations of nepotism and religious favoritism by reconstituting the leadership of the security forces.”
“Let’s consider this part of the press statement. Maintenance of security is the least responsibility of any government that knows its worth. Not news. The Constitution says so. But don’t you glean a hint of bile and bias in “that knows its worth?” Adesina said.
This statement struck a wrong nerve in many Nigerian Twitter users as they took to the microblogging platform to lambast the presidential spokesperson.

See a few reactions below

MiyettiAllah is always on national tv spewing hate, the Presidency or Femi Adesina is never bothered.

The moment CAN or PDP talks, they go on overdrive.
— Citizens of Nigeria(Official) (@FRNcitizens) January 24, 2020