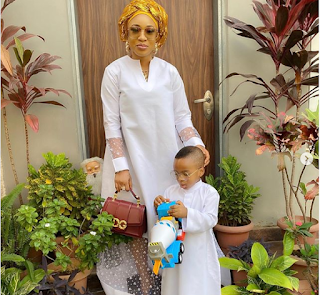 Recall a while ago, news broke out that the actress on her trip to Dubai, had been involved in a scuffle that allegedly led to her arrest. Subsequent reports claimed that her passport was seized.
This particular rumour was fueled by the fact that despite everybody else (including her bestie, Bobrisky) returning to Nigeria after the One Africa Music Fest, Tonto remained in the Arabian city.
Well, the actress is finally back in Nigeria. She recently stepped out with her son to attend church service and took to her Instagram page to share series of photos with little King Andre.
Swipe to see more photos below:


HAPPY SUNDAY HUNNAYS.. STEPPING OUT TO MY FATHERS HOUSE... WITH MY FAVOURITE MAN @kingandre_dikeh 🥰
A post shared by KING-Tonto Dikeh (@tontolet) on Jan 5, 2020 at 12:46am PST