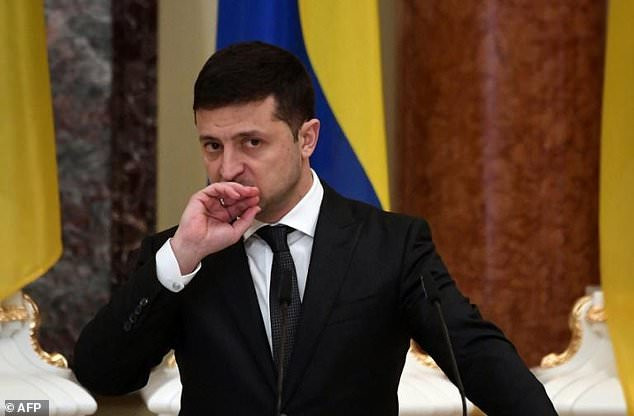 Ukraine has demanded that Iran punish those guilty for the shooting of a Ukrainian airliner and compensate victims after they admitted they accidentally downed the Ukraine International Airlines plane, killing all 176 people.

'We expect Iran to bring the guilty to the courts,' the Ukrainian leader wrote on Facebook, calling also for the 'payment of compensation' and the return of remains.

Ukrainian president Volodomyr Zelensky was due to discuss the incident with his Iranian counterpart President Hassan Rouhani at 5pm local time, his press office said.

This comes after Iran admitted on Saturday that it accidentally downed the Ukraine International Airlines plane, killing all 176 people on board on Wednesday, shortly after launching missiles at bases hosting US forces in Iraq.

Iran said a missile operator shot down the Boeing 737 after mistaking it for a cruise missile at a time when threats were at the highest level.

The majority of passengers on UIA Flight PS752 from Tehran to Kiev were Iranian-Canadian dual nationals but also included Ukrainians, Afghans, Britons, and Swedes.

Rouhani said Tehran 'deeply regrets this disastrous mistake' and have invited the United States, Ukraine, Canada, and others to join the crash investigation.

Tehran has handed Ukrainian experts enough data including 'all the photos, videos and other materials' to show the investigation 'will be carried out objectively and promptly,' Zelensky's office said. 'The political part of the work is finished,' it added.

UIA vice president Igor Sosnovsky told a news conference in Kiev on Saturday that Tehran should have closed the airport due to the regional tensions following the US assassination of a top Iranian general.

'They were obliged to close the airport. Obliged! Then shoot as much as you like.'

'Tehran has admitted its guilt in three days while Russia continues to try to get out of it.'
By Linda Ochagla at Monday, January 13, 2020