You Are A Witch – Davido Blasts Gayle King


Nigerian singer, Davido has also taken to social media to lash out at ace broadcaster, Gayle King over her interview with Lisa Leslie.
King, in the interview, talked about Kobe Bryant and his rape allegation in a way many called her out for as they believe she was trying to bring down the late NBA legend.
King was brutally dragged online but many black persons to include celebrities forcing her to release a video explaining her side of the story as being taken out of context.


Reacting to the interview Nigerian singer Davido slammed King as well calling her a witch. 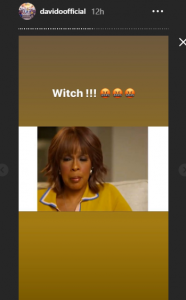